The Western Flower is a steam-ship which travels along the east coast of India between Madras and Calcutta via Waltair. The entire journey costs £340. One can engage the ship's navigator, or a certain Mme Sumathi in conversation on board. The navigator boasts the unlikely claim that he can see all the way to Rangoon with his telescope, despite the curvature of the Earth. Mme. Sumathi claims to be a weaver but is suggested to be a textile mill owner instead. She asks Passepartout to seek out her husband in Calcutta and tell him that she would welcome him home. 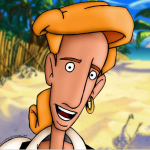